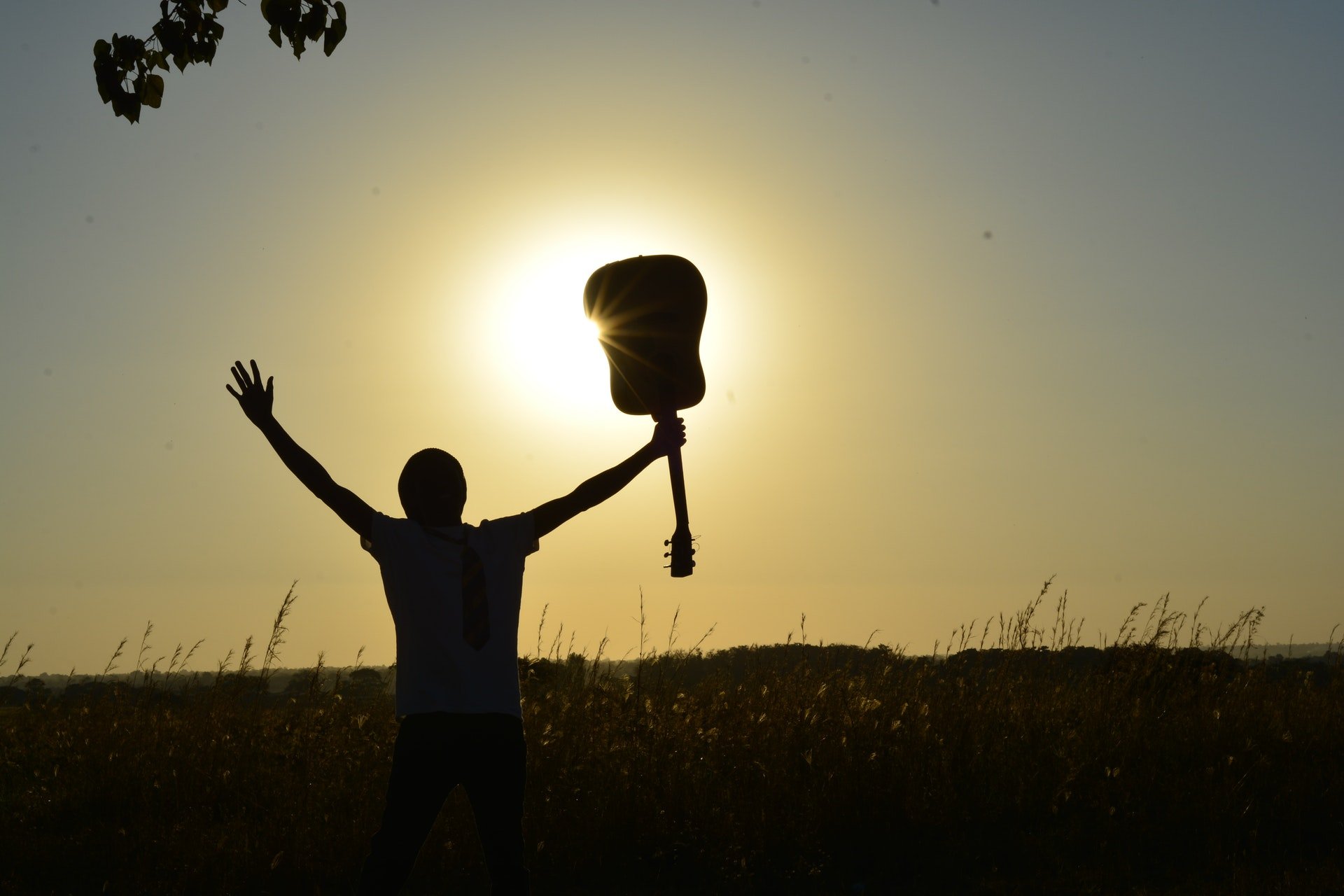 The guitarists are not just the people on the scene who make us wow-ing during concerts. They are also an inspiration for loads of brilliant guitar jokes.

By the way, we’ve gathered 40 of the wittiest guitar jokes of all times in the following article. Read on and prepare to laugh! 🙂

Disclaimer: The guitar jokes in the article are NOT meant to insult anybody. Their purpose is to make readers laugh, so don’t take it personally, dear guitarists! 🙂

1.  What do you call a guitarist who breaks up with his girlfriend? Answer: Homeless.

2. Two jazz guitarists meet in a bar, and one says, “Yeah man, I bought your last album, it was awesome!” to which the other replies, “Oh so that was you!”.

3. A man asks the devil: “how much does it cost to be the greatest guitar player in the world?”

The devil says: “Give me your Soul.”

The man asks: “What can I get for a dollar?”

4. Why are so many guitar players jokes one-liners? Answer: So the rest of the band can understand them.

5. What’s the range of a Gibson Les Paul? Depends on how far you throw it.

6. How can you tell when your guitarist is out of tune? Answer: His hand starts moving.

7. How long does it take to tune a 12-string guitar? Nobody knows.

8. Why do lead guitarists walk around the stage when they play? Answer: To get away from the sound.

9. What’s the difference between a lead guitarist and a terrorist? You can negotiate with a terrorist.

11. Q: Why was the guitar teacher arrested?

12. Q: What do you call a guitar player who only knows two chords?

A: A music critic.

13. Q: What do you call a successful guitarist?

15. What do you throw a drowning guitarist? Answer: His case.

16. What do a cup of coffee and Eric Clapton have in common? They both suck without Cream.

17. How do you make a lead guitarist slow down? Put some sheet music in front of him.

18. Q: How many guitarists does it take to change a light bulb?

A: Shine a flashlight in his ear.

20. Q: How many guitar players does it take to cover a Stevie Ray Vaughan tune?

A: Evidently all of them.

21. Q: How does a guitar player change a light bulb?

A: He lies on the bed so that the room is spinning around it.

22. Q: How does a guitar player show up for practice?

A: A guitarist who’s told too many drummer jokes.

25. Q: How do you get a guitar player off your front porch?

A: Pay him for the pizza.

26. Q: What’s the difference between a guitarist and a savings bond?

A: Eventually a savings bond will mature and make money.

27. How do you make an electric guitar sound like an acoustic guitar? Answer: Sit in the back and don’t play.

28. Q: If you drop an Electric Guitar Player and a watermelon off a tall building, which would hit the ground first?

29. If you were lost in the forest, who would you trust for directions?

Choice 1 and 2 indicate that you’re hallucinating.

A: Pick on someone your own size!

31. What is a “nerd”? Answer: Someone who owns a Classical Guitar.

33. Something a guitarist would never say: “Man, I really would rather be a bass player.”

34. Q: How does a guitarist protect his guitar from being stolen?

A: He stores it in a bass case.

36. A: How do you make your mom drive really fast?

Q: Put your guitar in the middle of the road.

37. Q: Why is Stephen Hawing so good at air guitar

A: Because he has excellent string theory

38. What’s the difference between an extra-large pizza and a guitar player? Answer: The pizza will feed a family of four.

39. What’s the best thing to play on a guitar? Answer: Solitaire.

40. Why bury guitar players 6 feet under? Answer: Because deep down, they’re all very nice people.

Do you know any other guitar joke we could add to our list? If so, let us know in the comment section below! Also, please share it so other people can laugh as well, cheers! 🙂