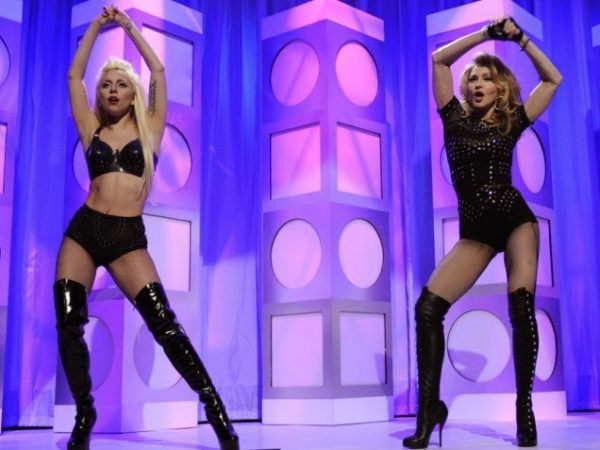 Balzac once said that: Architects  put a gloss on their mistakes with marble;  Doctors buried with dirt, while women cover up their mistakes by low-cut.

It is very known that Queen Caterina Medici buttoned up till the troat and also she dispelled her courts with deep bosomed. It is also true that the dep bosomed temptation has been lured for centuries.

If you questioned yourself why worldwide artists such as Madonna and Lady Gaga wear provocative clothes, now you know – the effect of the low-cut and the scandalous nudity draw the attention.

Madonna usually wears Avangard design clothes with sharp-pointed bras. In this outfit, she shows up at almost every wordly tour and imposes her model in the pop culture.

Few years after her stage performance, the stage welcomed Lady Gaga with silver colored dress and ultra low-cut. She had been pictured in Royal Albert Hall, where Gaga was with Prince Harry, who couldn’t stop staring at her bosomed.

It is a fact that a lot of the popular people – artists, actors, love to look provocatively and to draw men’s attention, to temp with deep bosomed in order to fulfill their high aims and to make other women green-eyed with envy.

The deep bosomed is the first thing that attract men’s attention, but it is not the only things. This was analyzed by psychologists’ research from the University of Nebraska. Dress with a low-cut is not only remarkable, but also very comfortable, was said in the research.

Some provocative clothes are suitable and preferable not only for their scandalous but also due to the high temperatures and many other reasons.

The modern fashion allows every low-cut to be worn with or without bra, but without overdoing it.

Dress with a very deep low-cut cannot be too narrow or with a big slit because otherwise, it will show more scandalous parts of woman’s body.

The advice of fashion experts is to be careful with low-cut, no matter if we are fans of Madonna, Lady Gaga, and many other celebrities. Provocative clothes are only for certain situations. They are not chic and they don’t draw good impression.