Groovez Dance Community is an open hip-hop dance community. It aims to innovate the contemporary hip-hop world by always searching for the latest trends in the genre while mixing it with other uncommon styles for a modern movement. The community was founded in Sofia, Bulgaria. Its main activities are hip-hop teaching classes and workshops that aim to develop talents who want to touch to the beauty and the freedom of the dancing art. The Groovez Dance Community produces and takes part in scalable dancing projects. 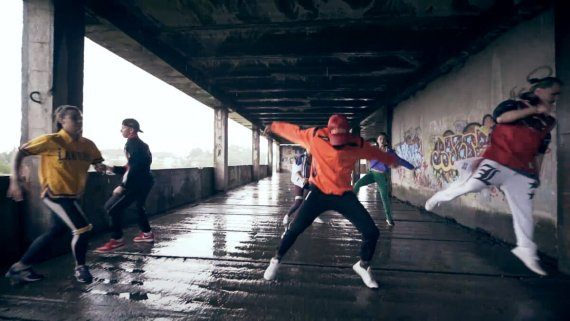 In the last couple of months, the contemporary showbusiness already caught the retro flavor of the 90s in all spheres, including lifestyle fashion and even art. This is the main tune in their projects lately.

The first video that has been released is on a Bulgarian track from the new album of NDOE – Many Words (Mnogo Dumi). The splendid lyrics and vibes motivated the dancers from Groovez to illustrate the feeling of the music with movements. They are dressed in brightly colored sweatpants that remind us of the retro style of the 90s. The video is shot in an abandoned construction site as a throwback to the creation and the golden years of the hip-hop.

Two weeks after the release of the first video, the second one was released – LOOK ALIVE, based on the track of Drake and Blockboy JB, sharing the same name – a very successful song for the industry this year. It shows a slightly aggressive point of view, illustrating the fight and the survival in life throughout unity. The intro of Groovez’s video is inspired by Tarantino’s 90s classic film – Reservoir Dogs with the emblematic slow motion of the gang in the movie.
Main pattern: FAMILY FIRST!

In the begging of August, the third video for the season was released – PRAISE THE LORD, by the hip-hop giant *ASAP Rocky, featuring the underground rap king of England, *Skepta. The final video brings positive vibes and appeals to the audience by showing a group of people, friends, celebrating the joy of life. Most of the video is shot outdoors, which unravels the idea of the limitless sky and its beauty. The clothing is once again a direct throwback to the 90s – sport polyester t-shirts with numbers on them, that symbolize the idea of a team and the meaning of everyone’s role in life.

Check out the Facebook page of Groovez Dance Community and stay tuned for the upcoming projects.